Calculation of Truss member forces by by using equlibrium equations

Truss is a structure comprising straight members forming one or more triangular units. The members of the truss are connected at the ends usually by pin-joints. The joint of a truss are commonly known as nodes. External forces and reactions are considered to act only at the nodes and result in forces in the members which are only axial forces (tensile or compressive).

Truss can be termed as;

(a) statically determinate; all the unknown forces (support reaction and member forces)  can be determined by applying equations of static equilibrium.  if m + r = 2j,

(b) indeterminate; equations of static equilibrium are not sufficient to determine unknown forces,  if m+r > 2j,

Where m = number of members in a truss;

j = number of joints in a truss; 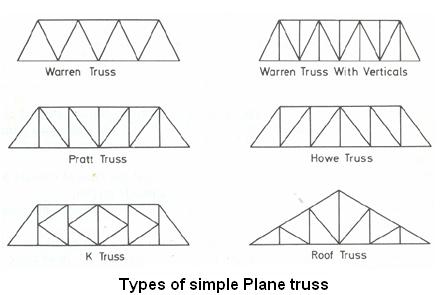 There are two methods for solving for the forces in the members of a truss;

(i) Method of Joints: In this methods we consider the equilibrium of the all the joints of the truss. Only two equations of static equilibrium, Σ Fx and Σ Fy. Therefore it is very important in this method that we should start with the joint having not more than 2 unknown forces. see problem 3-1

(ii) Method of sections: This method is used when the forces in a few members are to be determined. In this method an imaginary section is passed through the members in which the force is to be determined and then consider the equilibrium of the left hand side or the right hand side of the truss to find unknown forces. see problem 3-2

You can visit the following links of solved examples

Example 5-1 SFD and BMD for Cantilever

List of skyscrapers of the world
Contining Tall building worldwide