Procedure
The given beam has two load cases (i) point load and (ii) uniform load. We will solve this problem by applying principle of superposition.
Open http://civilengineer.webinfolist.com/mech/bmcalc.htm for Bending Moment and Shear Force Calculator and follow the steps given below.

Step 1. Select the following online calculators and open in two different tabs of the browser.

a. Calculator for Point Load (case 1)

b. Calculator for uniform load (case 2)

Step 2. Enter the required values of load and distances as per the given problem in the form for input values and calculate the values of shear force and bending moment at C and D by putting x equal to 4 and 8 respectively and also on both the supports A (x=0) and B (x=10). For using appropriate sign convention please visit our page of instructions for calculator.

a. Point load of 10 kN acting downward
Enter the values of beam span, load and the position of load as per the diagram shown and enter the position of section where you want to calculate the values of shear force and bending moment and then click "Calculate". You will get the result including support reactions, shear force (Fx) on both sides of the section (left and right) and bending moment Mx at the section as shown in the figure given below. 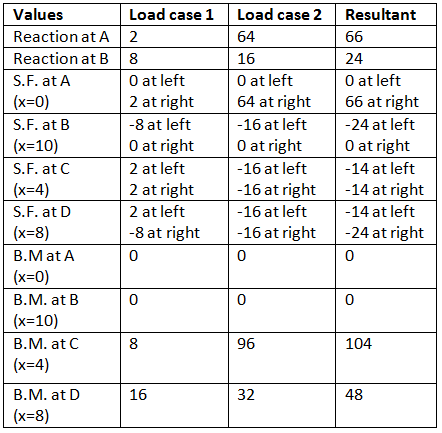 b. Uniform load of 20 kN/m acting downward
In the similar way enter the required input values in the form and then click "Calculate". Here also we will note down the values of Reaction at A, Reaction at B and then the values of Fx and Mx for different points A, B, C and D just by changing the values of x as shown in the figure given below. We will not use the value of maximum bending moment by this load case.

Enter the values obtained in the Results table given above and apply principle of superposition to get the resultant value.

List of skyscrapers of the world
Containing Tall building worldwide